Proud to be an American!

On a recent trip to Branson, we couldn’t help but stop in Joplin to see the tornado damage.

“Oh, Wow!  Which street should I go down now?  This one is still closed,” Amy said as we toured the horrific damage in Joplin.  “Wow, look at what’s left of that house!” It is so sad thinking of the lives lost during this storm.  I found myself wondering what some of these people were doing right before the tornado hit.  Neighborhoods were demolished, businesses were closed, and people’s lives changed forever.    Heaps and piles of people’s homes and lives were stacked in piles waiting near the street waiting to be cleaned up. Many people were volunteering their time cleaning up the damage. It has been nice seeing so many young kids and church groups getting involved in the cleanup.  It makes me proud to see so many young people get involved in serving others.

We took a few pictures, but somehow felt guilty doing so.  I am not sure why. W

hat I saw on TV was nothing like what I saw driving through.   I felt horrible for the people who were here on that day.  If you have ever been to Grandfather’s Mansion in Silver Dollar City, you know that the mansion is sideways and crooked.  Some of the homes that were still standing resembled Grandfather’s Mansion, sideways and crooked. I am sorry people of Joplin!  I cant imagine your pain and struggles right now.

We left Joplin shaking our heads and headed on down 44 toward Branson.  It was only a day shopping trip and we had several malls to get to, so we had to keep a pretty good pace. We found some good bargains and some cute clothes.  Well, Amy did.  I went with a purpose in mind, so that is probably why I didn’t find as much.

I needed shoes and clothing for China.  I also wanted a leather laptop bag at Fossil that I had seen last time I was there.  Sadly for me, I ended up with none of the above!  The laptop bag was gone, didn’t find any shoes, and I couldn’t find many clothes.

A little mall nestled next to WalMart on the strip caught my eye.  I had always seen it as I was driving through on my Branson shopping trips but never stopped in.  I noticed there was a leather outlet, so we zipped in there hoping to find a leather laptop bag or suitcase.  I did find a huge, and I mean huge duffle bag at the leather store.  I could have stuffed a chair and ottoman in that bag and still had room left over.  It was so inexpensive, but SO HUGE!  I decided against it since I didn’t know how I would get it in the taxi at the airport.  So, I still need a suitcase!!!

So we took what we thought would be a quick stroll through the mall.  It seemed kind of cheesy at first.  There wasn’t much there and as is familiar to Branson, there was a stage in the center of this small mall.  We walked down a long hallway  and noticed several posters with all branches of the military displayed along the way. 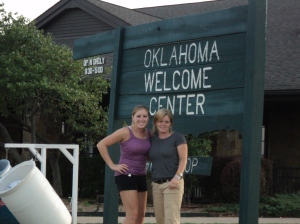 There was a t shirt/hat shop where military insignia could be sewn on your purchased item.  There was a little hair shop and a pizza by the slice as the food court in this small mall.  We ordered a piece of pizza each and found a chair in the center of the mall, not too close to the stage.   As we ate, we listened to some guy sing songs neither of us had heard before.  After each song he would crack a joke, or try and say something amusing to the audience.  This is when I really noticed what was going on here.

The other people who were also sitting in the mall listening to this guy appeared to be military veterans.  Many elderly couples were sitting next to each other tapping their feet and singing along to these songs.  I started noticing their hats and shirts, which read what branch of the service, or in what war they had fought.

Many of these men and women were couples, but as I looked around there were many sitting by themselves.  It made me sad.  I wondered what may have happened to their spouses.  All of a sudden, this little strip mall wasn’t so cheesy anymore.  It was a place for veteran’s to come and sit and listen to music in which they were familiar, or visit with other veteran’s, or just come and hang out and take in the sights and sounds as Amy and I did that day.   We ended up staying longer than we had anticipated, but we both felt honored and privileged to sit among such brave men and women who fought for our country, for us and for our family and friends!  I think I was supposed to be here this day so that as I leave for China, I will always remember how fortunate I am to be an American.  Thank you Veteran’s for letting us be a part of your day!

I am a bereaved parent. I write to give hope to other bereaved parents who are fresh in their grief. I want them to know life begins again. It (life) is forever changed, as are you, but one day, you will smile again. You may travel, you will make new friends, your heart will mend, though never heal and it will be a painful ride. It is one step at a time....sometimes, even one breath to the next is all we can seem to live through each day. But each day will be a new beginning, a different beginning, a different you. I have two surviving children: Amy, who is married to Brandon, and they have one daughter, Avery, and one son, Dylan. and Eric who is a doctor and is Clifton's twin brother. Clifton passed away when he was nearly two years old. As any bereaved parent knows, it is tough, REALLY tough trying to live after the death of a child. I lived in Shanghai, China for three years after the death of my son, and then lived in Beijing for two years. I am discovering life again, one step at a time. I returned to Oklahoma in February , 2020 due to the uncertainty of the virus. Little did I know the uncertainty would follow me across the ocean. This is nothing compared to the death of a child. I will survive! END_OF_DOCUMENT_TOKEN_TO_BE_REPLACED
This entry was posted on Tuesday, July 26th, 2011 at 5:31 pm and posted in Inspirational. You can follow any responses to this entry through the RSS 2.0 feed.
« On our Way to Mount Rushmore……
The Naked Man »