A Spoon, a Bowl, a Sheet and a Slipper

My time in China is coming to a close.
Recent developments made me alter my way of thinking in regards to getting my personal items back to America. Originally, the plan was to take all 8 suitcases with me on the plane. However, as I was moving things from my apartment to other teacher’s apartments, I picked up something a little too heavy and hurt my back. Immediately, I began to rethink taking 8 suitcases, a carry on and of course an overstuffed personal item on the flight with me. This way was going to be cheaper, but not practical considering my new injury.

So, last minute I decided to ship. Long story short, and believe me, unless you have spent some time in China, there is no way you can even imagine the fiasco that came along with dealing with the shipping company. Anyway, my items needed to be repacked and boxed. They brought boxes and began opening suitcases and throwing the contents into the boxes. I was gathering more things to put into the boxes so I could take advantage of every last cubic centimeter of space in each box. Little did I realize, as I was gathering things, so were they. I only realized that the next morning. They had taken all my clothes!

Well, I still had one pair of jeans, two mis-matched socks, some undergarments, one towel, 3 shirts and a slipper. 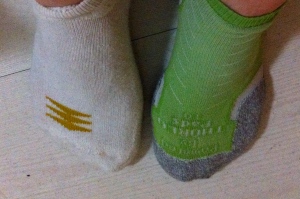 mismatched socks for the week

It was going to be an interesting week strutting around in my new fashion wear. I did however, have a small bag packed, as I was going to go to Mongolia for a week after school was out, but that bag only had shorts and t shirts, not exactly work attire. Oh well, It was only a few days that I would wear jeans to school. I really had no choice. (smile)

The day I was scheduled to leave for Mongolia, I discovered the flight had been cancelled! I came back to the apartment and realized it was going to be a long week, as I only had one bowl, one spoon, one sheet, and 8 frosted mini wheat squares left in my cereal box.

We really just don’t need much in order to survive I’m discovering. It would be nice to be able to cook something for dinner, but I have no more pots or pans. So I will order delivery. It would be nice to dry off with a clean towel, but I only have one and I gave the washer/dryer to a friend, so I hang up my towel to dry and spray perfume on it so it smells nice. It would be nice to sleep in a soft bed, 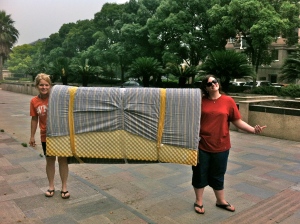 but I had given my mattress to a friend. So I can sleep on the couch. There is always a solution, no matter the circumstance. I have been in worse situations.

I guess now I am ready to return to the comforts and conveniences of America. I leave behind so many amazing friends, a bowl, a spoon, and a sheet, but I bring with me my slipper and memories to last a lifetime.
Thank you China and see you soon America.

I am a bereaved parent. I write to give hope to other bereaved parents who are fresh in their grief. I want them to know life begins again. It (life) is forever changed, as are you, but one day, you will smile again. You may travel, you will make new friends, your heart will mend, though never heal and it will be a painful ride. It is one step at a time....sometimes, even one breath to the next is all we can seem to live through each day. But each day will be a new beginning, a different beginning, a different you. I have two surviving children: Amy, who is married to Brandon, and they have one daughter, Avery, and one son, Dylan. and Eric who is a doctor and is Clifton's twin brother. Clifton passed away when he was nearly two years old. As any bereaved parent knows, it is tough, REALLY tough trying to live after the death of a child. I lived in Shanghai, China for three years after the death of my son, and then lived in Beijing for two years. I am discovering life again, one step at a time. I returned to Oklahoma in February , 2020 due to the uncertainty of the virus. Little did I know the uncertainty would follow me across the ocean. This is nothing compared to the death of a child. I will survive! END_OF_DOCUMENT_TOKEN_TO_BE_REPLACED
This entry was posted on Sunday, June 29th, 2014 at 6:51 am and posted in Uncategorized. You can follow any responses to this entry through the RSS 2.0 feed.
« The Bucket List Narrows
It’s not that I haven’t had anything to write about, I have! »

2 responses to “A Spoon, a Bowl, a Sheet and a Slipper”