Krakow’s Bridge of Love and My Random Thoughts…

The Bridge of Love in Krakow is a historic bridge connecting Krakow’s beautiful center with its most historic neighborhoods.

It was Christmas Eve day and I had nothing better to do while I was wandering around Krakow, so I decided to check out number 34 of 289 things to do in Krakow, according to Trip Advisor, anyway.

It was a wonder I even found the bridge as my blue dot on Apple maps never really fully aligned with the direction of the bridge.  I often turned this way and that trying to get my

dot to align, kind of like being in a relationship, trying to align and make things work.  I felt a bit foolish at times when people watched me going back and forth with phone in hand trying to find my way.

Some people pointed me in the right direction while others got a little giggle at my expense. This made me even more determined to get there.  Apple Maps and my blue dot finally aligned but by then, I could see the bridge and no longer needed the map.  I thought this was like a relationship at times, too.  Finally, when things are starting to align, everything is tossed aside with a finger pointing at one’s expense.

I was happy to have taken the walk to the bridge taking in the sights along the way, especially seeing the horse-drawn carriage rides with the Wawel Castle as the backdrop, which by the way legend says there is a hungry, fire-breathing dragon th 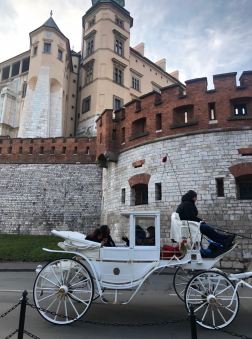 at lives under the castle.  Krakow is the most romantic city to which I’ve traveled.  Loving couples cozied up inside their horse-drawn carriages set the mood for my walk across Lover’s Bridge.

The bridge itself is 145 meters long, crossing the Vistula River. There are acrobats and circus performer sculptures scattered along the bridge. I stopped to take a look at some of the older looking locks and I wondered if these couples stood the test of time and are still together or if like many of the locks, had their relationships began to ru
st with lack of maintenance to prevent damage.

Magda and Derek Malbork’s lock seemed pretty solid. Their lock was showing a 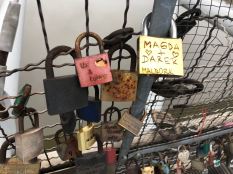 bit of rust in the carving of their names, maybe like wrinkles on a face, but the shackle itself seemed solid and well cared for. The shackle is responsible for keeping the padlock connected or locked to whatever it is attached to and it seemed like it was doing its job, despite its now outward, old looking appearance.

Though, the shackle seems like it is the weakest part of the lock because if someone wanted, they could just take the bolt cutters and snap it into.  Just like in relationships, if the shackle is compromised then the relationship loses trust, which is essential for holding a healthy relationship together.

The red lock of Ula and Lukasz is quite rusted. The lock looked like it had been there a while, but originally it looks like they had it professionally engraved and they went with one of the few red locks on the bridge.  I thought they were probably a happy go lucky kind of couple who had put a lot of effort into choosing their lock, maybe putting the same amount of effort into their relationship to make it work.  Though over time, perhaps instead of buying replacement parts for their locks, they just let it go? (just my random thoughts)

The lock between Ula and Lukasz’s red lock and and Magda and Derek’s super heavy lock seems to have seen better times.  I wondered about the people who placed this lock on the bridge professing their forever love while tossing the key into the river. You can’t see it in the picture, but part of the shackle is starting to rust through and will probably come apart without some maintenance soon. 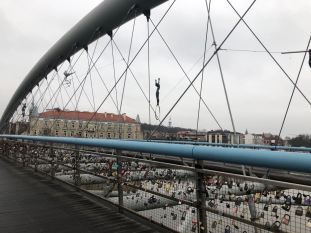 As in a relationship, knowing what causes it to fall apart can help prevent it from total failure. Preventing and stopping rust in hard to reach areas is important for the integrity of a lock, just like in relationships, the hard to reach places need maintenance and understanding, too.

In order to keep a healthy lock, you need to take extra care around salt. In a relationship rubbing “salt into a wound” does not make for a loving relationship, either.  You should inspect the lock regularly.  Are Magda and Derek maintaining their relationship with frequent inspections and check ins? Or has Darek broken her trust and left her wondering why she threw the key into the river? I’m pulling for Magda and Derek. Their lock seems strong.

Did Ula and Lukasz have struggles? Were they or are they still happy? If they had problems, did they work through them or just walk away. What about the lock filled with so much rust that it is just falling apart.  Do you try to get parts to fix it? Or just let it go?

I thought about the body of the lock. The lock itself tries to conceal as much of the shackle as possible to prevent forced entry. All the love represented on the bridge by various sizes and shapes of locks would need a tough external shell to protect the integrity of the lock. Do people in relationships have large enough “bodies” to protect their relationships from external forces and thoughts? Some do, yes. I’m happy for those couples. I know several couples who have been married for years and are committed to their relationship.

Anyway, I had a lot of thinking on that bridge and wondered about the relationships of all of the people who had placed locks representing their forever love. I wondered what secrets were held within the bodies of those locks. I wondered if secrets were later discovered and caused so much harm in the relationship that there was no going back. I wondered if they had wished they had kept that key so they could remove the lock in times of trouble, or if they were happy they had thrown the key in the river and are living their happy ever after.

I hope the love represented by these locks have withstood the struggles of life and the commitment needed in a forever relationship. And for the rest of us, life sucks if you let it, so don’t let it!  Enjoy and live your best everyday. Here’s to wishing everyone a lifetime  full of a tough, strong lock!

I am a bereaved parent. I write to give hope to other bereaved parents who are fresh in their grief. I want them to know life begins again. It (life) is forever changed, as are you, but one day, you will smile again. You may travel, you will make new friends, your heart will mend, though never heal and it will be a painful ride. It is one step at a time....sometimes, even one breath to the next is all we can seem to live through each day. But each day will be a new beginning, a different beginning, a different you. I have two surviving children: Amy, who is married to Brandon, and they have one daughter, Avery, and one son, Dylan. and Eric who is a doctor and is Clifton's twin brother. Clifton passed away when he was nearly two years old. As any bereaved parent knows, it is tough, REALLY tough trying to live after the death of a child. I lived in Shanghai, China for three years after the death of my son, and then lived in Beijing for two years. I am discovering life again, one step at a time. I returned to Oklahoma in February , 2020 due to the uncertainty of the virus. Little did I know the uncertainty would follow me across the ocean. This is nothing compared to the death of a child. I will survive! END_OF_DOCUMENT_TOKEN_TO_BE_REPLACED
This entry was posted on Friday, January 3rd, 2020 at 8:28 am and posted in bridge of love, Poland. You can follow any responses to this entry through the RSS 2.0 feed.
« Keep your butts out of the water
The Towel »