Chairman Mao Zedong Memorial Hall is an hour from where we live in Beijing so Jayne, Simon and I decided to leave our place early to get in line at the Memorial by opening time, 8AM.

We tried this last year during Chinese New Year holiday but we were too cold, hungry, needed a restroom and it was snowing, so we decided to jump out of line and try again another time. Today was the time.

After our subway trip to Tiennamen Square to see the embalmed Chinese former leader, we lined up with thousands of others to wait for our turn to pass thru the mausoleum. This is a free tourist attraction in Beijing. I really don’t know why they call seeing a dead body a top “tourist attraction”, but it is one of the top things listed to do in Beijing. So, we too, joined the millions of people who stop by for a short, less than 60 second shuffle through the mausoleum peering inside the glass case of the embalmed former leader of China.

When we got to the area where people queue up, the guard motioned to Simon that he couldn’t take his backpack inside. He had to leave the line and take his backpack elsewhere. Jayne and I kept moving. Simon could push his way thru the line like the locals to catch up with us after he dropped off his bag.

The guard didn’t see my bag as it was quite small, but i decided to put it under my coat and cover it with my scarf and keep moving through the line.

The line circled around the mausoleum and came to a security checkpoint. Hmmm. I had my bag tucked under my coat. I decided to take it out so it didn’t look like I was trying to hide it. We put our phones, keys and my bag in the little bucket and went through security. 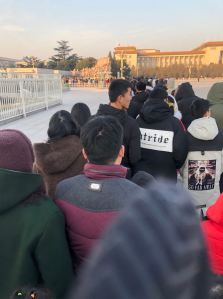 The security girl said “No,” and pointed to my bag. She took Jayne’s whistle and said “No.” She started to walk away with our things. Jayne’s whistle was attached to her keys and my bag had my passport, phone, book and hand warmers inside. We decided to follow her.

We followed her through the security checkpoint as we weren’t going to let her out of our sight. She went to a window ledge outside so she could search the bag. She said “No this” as she pointed to my bag again. She opened it and pulled things out. She took my book, (one that I picked up in Poland) and thumbed through it. I always take a book with me as it often takes hours on the subway. She handed it to me. The book passed the entry test. She looked at the heat activated hand warmers and said, “No this.” I just nodded and said, “Ok, no that.” I can live without the hand-warmers. She put my phone back inside the bag, rolled my bag up in a little ball and handed it back to me. I was truly surprised she returned the bag since it was forbidden and prior to us getting to security, they pulled a guy out of line and had a heated discussion about the things he was carrying inside.

I didn’t know whether to put the book back inside or just tuck it under my arm and keep walking. I chose the latter. Jayne was not so lucky with the whistle. She did however, get her keys back that were attached to the plastic whistle that she uses on the playground at school. We had visions of her blowing on that whistle inside the mausoleum and had a little chuckle.

The next step in line was to purchase a cheap flower for placement inside the mausoleum. Many people were purchasing their cheap, plastic wrapped yellow flower yellow to take inside. We chose not to purchase the flower.

For a year we have talked off and on about going back and lining up again. Well Jayne didn’t. She had no interest, but she was promised dumplings afterward so she decided to join us. Honestly, I wasn’t there to pay my respects, but was going out of curiosity. What does someone look like who has been embalmed and has been on display for more than 40 years?

Upon entry to the mausoleum, we saw a big statue of Chairman Mao seated in a 11.5 foot marble chair, similar to that of the Lincoln Memorial but not near as majestic. People placed their flowers at the foot of the statue. The line kept moving and divided into two lines to enter the next room.

Upon entry into the next hall, we had about 30 seconds to file by the body of Chairman Mao. He was in a glass enclosure. His face was illuminated and seemed to glow an orange color from the inside out. Aside from his face, he was covered with a red flag. There was not time to stop as the guards kept moving people along.

I don’t really know what to think about his glowing face. Some people say there is a plastic or wax coating over his deteriorating body, while others say it is his body and they have taken extreme precautions to preserve it for more than 40 years. 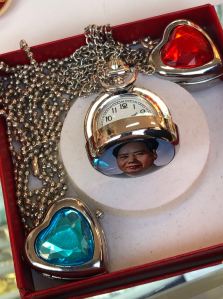 Leaving the hall and Chairman Mao’s body behind, we immediately were led to an area outside filled with souvenirs with Chairman Mao’s face. Simon was in his element, eagerly choosing his cheap, tacky souvenir to remember his experience of viewing the body of Chairman Mao.

From what I understand, when the last person tours Chairman Mao’s body each day, he is removed to an earthquake proof chamber below ground, until the next day when thousands more come to pay reverence, satisfy a curiosity, or gawk at the body of the former Chinese leader.

And for Simon’s bag? He got it back! 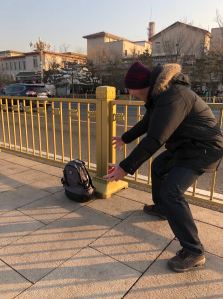 Simon was happy to find his bag!

I am a bereaved parent. I write to give hope to other bereaved parents who are fresh in their grief. I want them to know life begins again. It (life) is forever changed, as are you, but one day, you will smile again. You may travel, you will make new friends, your heart will mend, though never heal and it will be a painful ride. It is one step at a time....sometimes, even one breath to the next is all we can seem to live through each day. But each day will be a new beginning, a different beginning, a different you. I have two surviving children: Amy, who is married to Brandon, and they have one daughter, Avery, and one son, Dylan. and Eric who is a doctor and is Clifton's twin brother. Clifton passed away when he was nearly two years old. As any bereaved parent knows, it is tough, REALLY tough trying to live after the death of a child. I lived in Shanghai, China for three years after the death of my son, and then lived in Beijing for two years. I am discovering life again, one step at a time. I returned to Oklahoma in February , 2020 due to the uncertainty of the virus. Little did I know the uncertainty would follow me across the ocean. This is nothing compared to the death of a child. I will survive! END_OF_DOCUMENT_TOKEN_TO_BE_REPLACED
This entry was posted on Wednesday, January 22nd, 2020 at 5:21 am and posted in Chairman Mao's Body, China, Top Tourist Attractions in Beijing. You can follow any responses to this entry through the RSS 2.0 feed.
« The Towel
Coronavirus »